Yes, been gone from my blog for quite a while again. I mean, what do I have to say, not much done around here unless I count the major time sucker of working on my cousin's house (he passed away this past January).  It has just gone on the market, hoping someone wants to buy it because it's almost brand new again and is move in ready.  And no, I didn't do all the work by myself, my hubby did the bulk of it. Hoping this frees up more time in 2022 to spend on being creative. 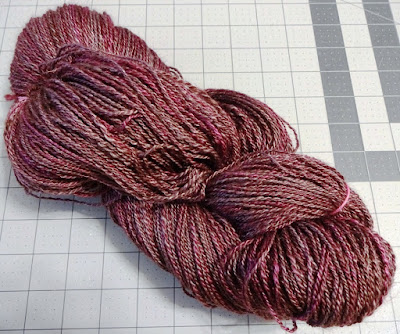 Just in the past 2 months I started spinning again occasionally in the evenings.  I spun up this luscious silk/yak blend.  It hasn't been washed yet and I haven't counted up the yards so have no clue what it will grow up to be. Right now I just keep petting it as I walk by.  It was a little hard on my arthritic hands to spin as it was so slippery. What has happened with that anyhow, arthritis has been gradually affecting my hands the past couple of years, feel like I'm moving toward getting old - yikes. I have some other skeins to share in my next post that were spun recently. 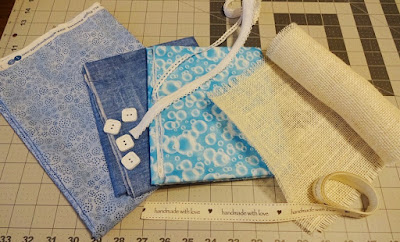 Since I'll be having a bit more free time (at least assuming so) I pulled out what I got in the ASG (American Sewing Guild) neighborhood group's brown bag challenge.  This is what I got in my bag.  I'm starting to brainstorm on what I can create. Looks kind of beachy, doesn't it? Brainstorming seems hard these days, anyone else experiencing that? I've been having such problems all year focusing on being creative......or maybe it's just focusing in general.....yep, that's it.
The past few weeks I've been collecting fabrics in grays and teals for a quilt for the guest room trundle bed. I'm going to make it big enough to cover both mattresses when opened up. A few more fabrics and I may be ready to start cutting and sewing.
I'm hoping to get back to weaving in the near future, like not long after the holidays. I've focused on weaving to sell for over 30 years and now have decided to retire from selling - it's hard to make that transition.......but I'll eventually figure it out.
Even though I've been in a funk for well over a year due to family issues I'm convinced 2022 is going to be better and am looking forward to spending time in the studio again.
Posted by Cindie at 3:54 PM