The kitchen remodel is almost finished.  I've got some before and after photos..... 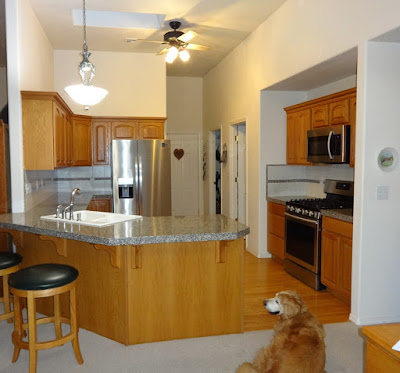 BEFORE - Looking at the kitchen from the kitchen nook (computer nook). It's not evident in the photos but these cabinets were below builder grade quality, many of the drawers falling apart, shelves bowing and very short uppers. Countertops were granite tile - I hate grout in kitchens. The sink was scarred. We had already removed one light fixture - it was a sight to behold - a huge ornate dining room chandelier which we replaced with the fan - that light over the sink came down later. There's my sweet Bailey in this picture taken right before kitchen demo - brings tears to my eyes. 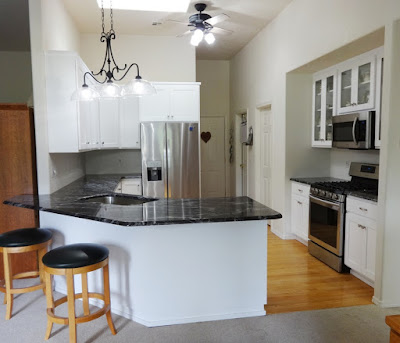 AFTER - Here's the after from the same angle.  The faucet isn't in yet as the epoxy or whatever it is needs to cure on the under mount sink - faucet, garbage disposal and dishwasher hookup be finished today by Sam. The new lighting over the sink is up. We kept all the same appliances as they are practically new. That horrible carpet will be going eventually - it's nasty. 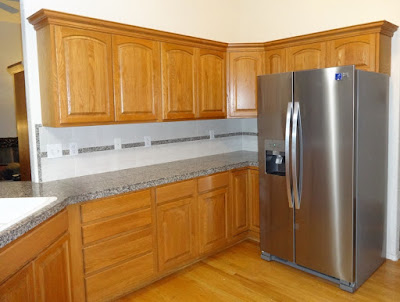 BEFORE - Here's looking toward the fridge. 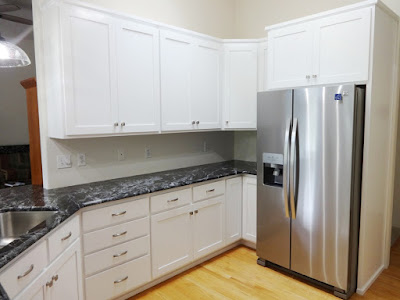 AFTER - So much better - the fridge now looks like it belongs. We haven't decided on a backsplash yet - I have a feeling it will take a while to figure that one out. I just know I want something relatively simple and not busy/fussy. Our new granite is mostly black with white running through it like a reverse marble - just a tiny bit of sparkle. What a pleasure to have knobs and drawer pulls - the old cabinets had none and were a pain to open. 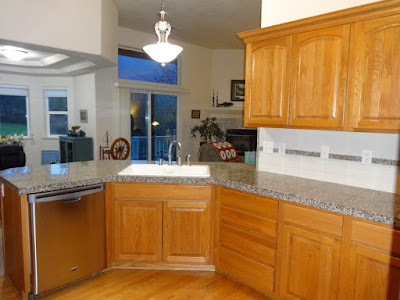 BEFORE - Looking toward the sink. 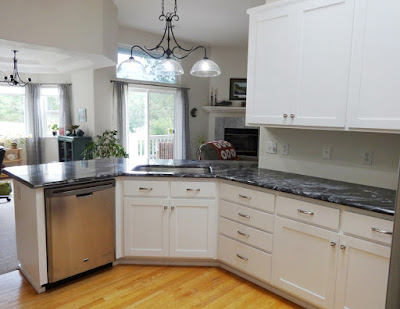 AFTER: Now looking toward the sink - so much nicer. This house has high ceilings throughout except the kitchen nook where there's a dropped coffered ceiling - see it to the left in the photo. It's a monstrosity - it's horrible - it's going......it might be the next project, there's also the gas fireplace reno before next winter, it's very old and puts out no heat plus the mantle is weird made out of drywall - it's far in the background. 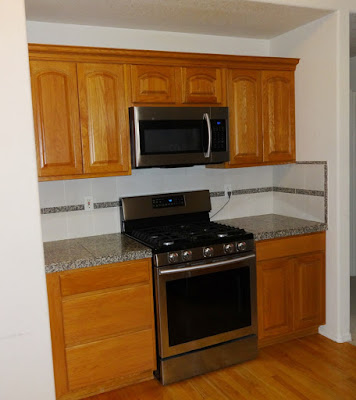 BEFORE - And here's the stove wall. So, why in the world didn't they extend those cabinets all the way to the top???  The builder was being cheap is my thought. And look at that cord coming from the back of the gas stove to plug it in. Why in the world wasn't there a plug behind the stove??? There is now. 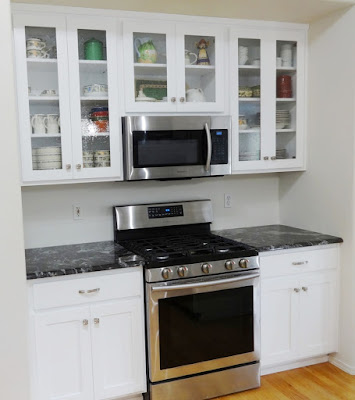 AFTER - This picture is pretty dramatic. So much better........and no cord coming up from behind the stove. After we do all the other work involving drywall, the drop ceiling and fireplace, and walls will be painted a light gray, baseboards white. I hate painting anymore so not looking forward to that.

We generally do all reno work ourselves to save money but the kitchen was a place we had to rely on others like KA Designs for our locally made cabinets and Umpqua Stone for our granite. But Sam did do all the drywall repair work from where the old backsplash was removed and tore up the walls, he also did electrical and plumbing work and built up the floors to match the wood floor height underneath the cabinets as that wasn't done before which makes it impossible to remove/replace appliances. We'll do the backsplash ourselves once we have time to explore tile options and audition them. 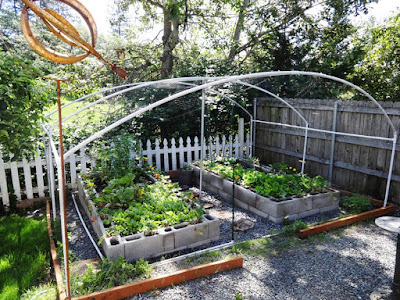 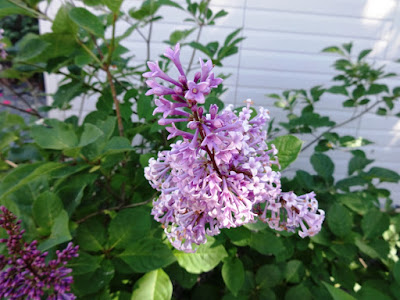 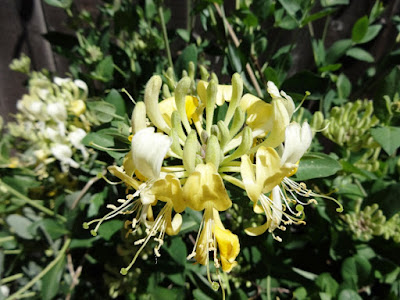 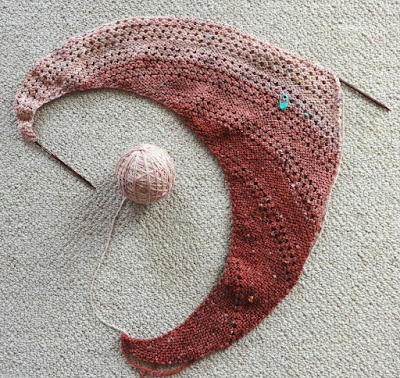 I decided to start knitting an asymmetrical shawl using the Inglenook Fibers 12 Days of Christmas fiber that I spun. You can check out the progress of the spinning starting Christmas day 2018 here on the blog. I'm now into knitting color #3, soon I'll be knitting color #4. The progression will be moving to golds, greens and even black. This ball will just get into the gold, then I have another huge ball that continues with the golds and others.


My roses are covered with hundreds & hundreds of buds, some blooming. Yesterday I cut a vase full to bring inside. I am so excited to have roses - never could have them at past homes as the deer loved to eat them. I snapped a few outside pix this morning......enjoy. 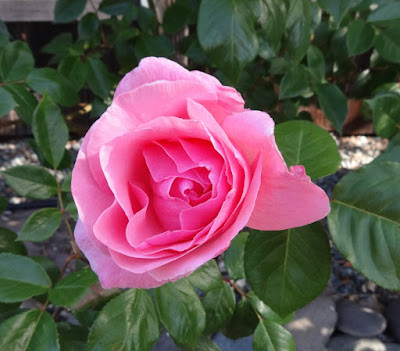 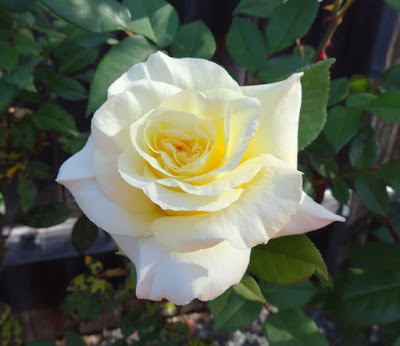 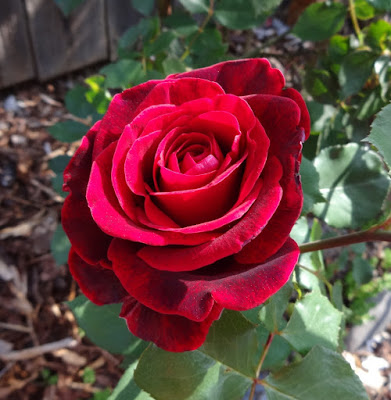 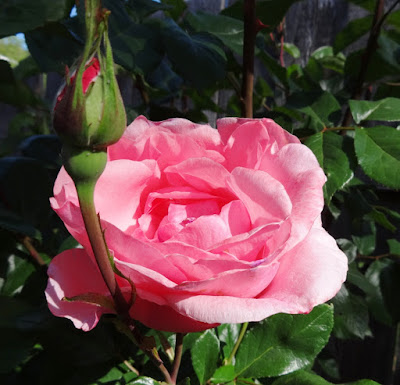 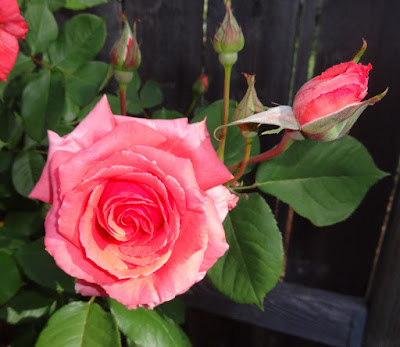 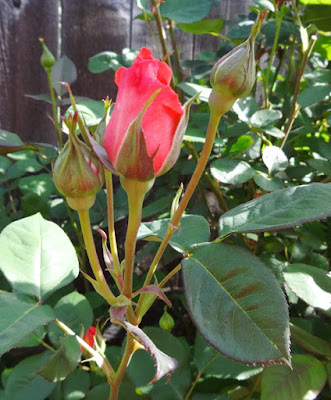 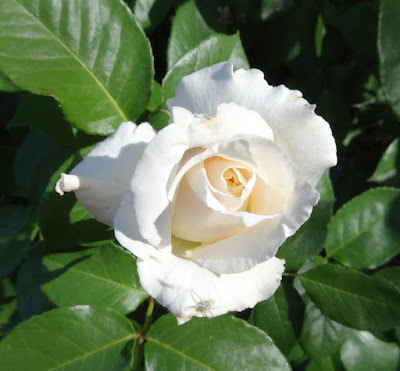 I've been sampling with free motion quilting for the gingko wall hanging. I got pretty discouraged the other day thinking I bit off more than I can chew, not just thinking, knowing that it's beyond me without a lot of time spent getting over the learning curve. I'm not sure what I was thinking as everything takes time to learn. 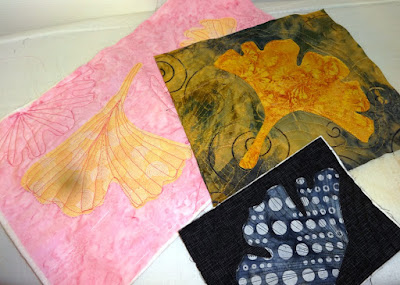 So here are some samples (not the actual fabric) of free motion quilting, it's easier using small pieces and still looks bad. The wall hanging will be 38"x53" - not as easy to maneuver at the machine.  I've gotten a lot of advise from friends & quilters and think I'm going with quilter/spinner/weavers friend Diane from Idaho's advise...... 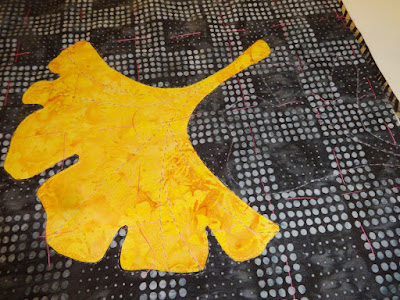 .....I'm going to hand quilt it. Here's a sample where I did just a bit of hand quilting and I already like it better. I may go with gray thread in the gingko instead of gold like I was originally thinking - will stitch a few lines with gold thread before deciding. I'm going to quilt gingko silhouettes in the background - I started on one on the right hand side although it difficult to see in this photo. If I had ever thought I'd hand quilt this I wouldn't have fused down the gingkoes but too late now, will just be a bit harder to stitch on the leaves. So, this is now turning into a time consuming project but in the end I'll be happier......and now I need to go out and get myself a quilting frame, not a big expensive one, just one of those hoops on a stand. Next up I need to check if I have a piece of batting big enough, get to the fabric store for backing fabric and buy a thimble - I have a small thimble collection but they aren't the kind I'd actually use.

But first I'm going to put things away in my new upper kitchen cabinets. They've finally been installed and we're now awaiting granite installation on the 15th. I can load up the uppers but will wait on the lowers as granite dust may get into the lower cabinets during install day. We've been living many more weeks than anticipated without a kitchen. Before and after pictures once it's done.

The garden is growing - I picked my first lettuce yesterday, so exciting.  The rose bushes are covered with hundreds of buds, there are many very close to opening up. I've never had roses before so this is also exciting.

It's a beautiful day here in SW Oregon - hoping for many more before 'smoke season' aka fire season arrives. Keeping fingers crossed that it's not as bad this year and we aren't socked in by smoke all summer.

Now it's time to put on my current audio book and work on the kitchen - A Breath of Snow & Ashes - book #6 in the Outlander series.  It's a big commitment at something like 38 discs.....I had been away from it for almost 2 weeks until yesterday when I listened to 4 discs while stitching.