Many thanks to all for letting me vent on this blog about the fire, it sure helps my mental health to be able to do that. The fire is still raging this morning, more resources arriving all the time. Having 100 + temps does not help with the fire fight.  Friday a dry front is supposed to come through with added winds - not a good thing. The smoke yesterday was in the highest hazard level, this morning a bit better. This fire won't be out until fall/winter rains but hopefully it will be contained before too many more losses.......hope, hope........... 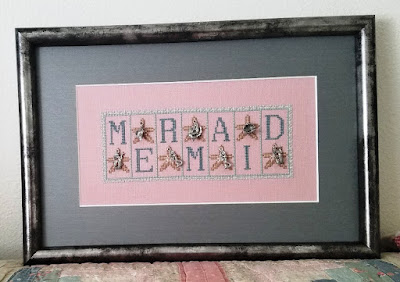 I don't think I ever posted these cross stitches that I finally got framed.  I stitched them quite a few years ago, just hadn't added charms. A couple months ago I added the charms and stretched them over foam core and took them to Michael's for framing during one of their 70% off sales. I love how they turned out - they're now ready to hang at the beach cottage.  Not sure if the charms are easy to see in the mermaid piece, they're all different. The matt is actually silver - love the way it turned out. 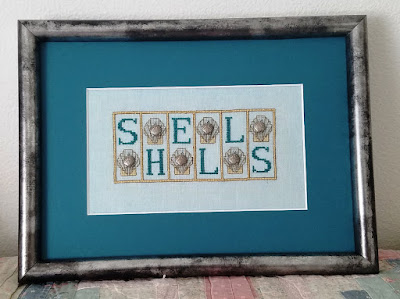 I love the shell piece  - the charms on this one are all cockle shells. 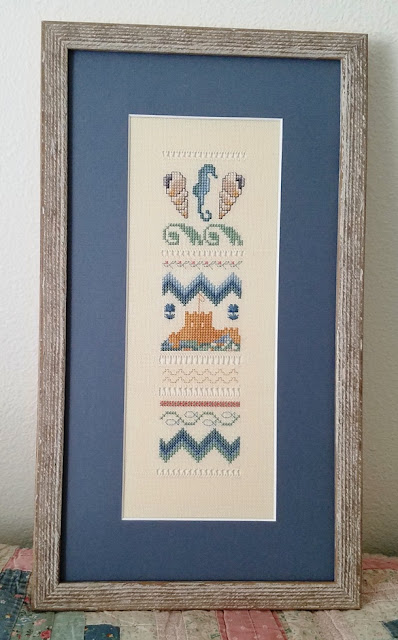 And then there's this sweet little piece, looks big here but it's really very small. It's hard to see but there are pulled threads in this one.  I'm pretty sure all three of these will end up in our bedroom as other walls are pretty full but the bedroom walls are lacking.  I still have many cross stitch pieces done over a span of 30 years that need to be up on walls, on pillows, whatever - maybe this winter I'll figure out what to do with them all even if it's giving some away because I have nowhere for them.
Posted by Cindie at 11:38 AM 2 comments: 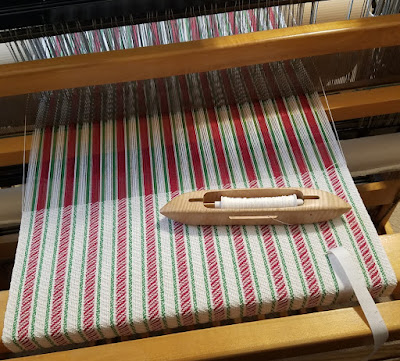 'This' is a warp of some holiday towels that are on the loom right now. it's an undulating twill that many made candy cane towels out of several years ago.  They're fun.

'That' is the forest fire that is ravaging in our area. I thought we might make it through fire season this year without a major/mega fire but not so lucky. On July 17th we had a lightning storm come through parts of SW Oregon - our county alone had 58 fire starts the last I knew. Almost all of them were put out quickly, none remain a problem except for the Rum Creek Fire up river from us. It has now made national news programs.

It's in very steep terrain, very dangerous for fire fighters, one died there last week. They are working on putting in fire lines and contingency lines but most of the fire fighting efforts are by air because of the terrain - bombers dropping retardant and copters dropping water. There are crews of structure protection fire fighters working on protecting homes. The evacuation orders go from 1 - get ready, 2 get set and be ready to go at a moment's notice, level 3 go now you are in grave danger and you may not be able to be saved.  There are all 3 levels on this fire encompassing a huge section of the county. For how far the fire is we are still seeing level 1 approaching where we live which is on the outer western edge of the city of Grants Pass. Levels are changing constantly - first change for the evening just a bit ago added more area near us to level 1. Governor Brown ordered the Conflagration Act on Saturday which brings more resources to the area and yesterday declared a state of emergency which brings even more resources. Some are already arriving, hope they continue to come in to help our area.

We already have a fire plan in our house - our GO bags have been packed most of the summer and are on the floor in the bedroom to grab and run, rolling carts sit near paperwork that could be thrown in quickly. We have friends in towns just to the east who have offered us refuge if we need to leave. Two vehicles have full gas tanks. I could make light of it and say it is what it is but I can't - I get very anxious over fire and I'm not doing well, I'm very scared for those closer to the fire including many friends, I'm very scared for the fire fighters, I'm very scared for not just my city but others in the fire's path and I'm very scared for us.  Please send positive thoughts our way, we need them right now with temps around 100 forecast for the week.

Posted by Cindie at 7:00 PM No comments:

Yes, that's how life feels at times - frayed. But in this case it's a baby/toddler blanket made with recycled blue jeans. I used 3 different sheep fabrics from my stash on the back. I love the way it turned out but I'm afraid this is the only one I'll be making, snipping all those layers took forever and really ouched my arthritic hands.  I'm not sure what I'll do with this if the local foster kids organization doesn't take it with other donations from our local sewing guild. I'm not sure why they wouldn't like it but who knows. I'd make this again using something other than jeans fabric, something soft and easy to snip like flannel or cotton. Anyhow, it turned out really cute and would have been a much quicker project had it not been for the heavy jeans.  I need to come up with some other projects to use up the rest of those jeans. 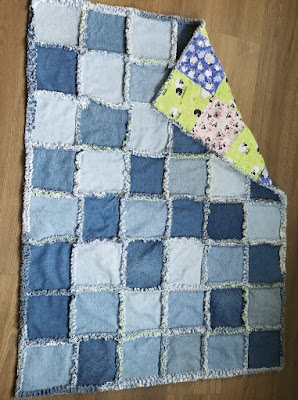 Last week the extended weather forecast showed the temps going from 110+ to the low 90's, upper 80's this week........well, it was wrong, once again.  Upper 90's, 100's later in the week. We are in extreme fire danger from now until fall rains. The fire in Northern California is close and we're getting socked in with smoke. I've really grown to hate summers. Our first 10 years in Oregon wasn't bad but each year we have more and more days over 100 and fire danger is worse. it doesn't help that our AC is limping along and the house is warm and stuffy - new HVAC system on order. I'm on my countdown to the end of fire season. I use the end of September as my last day although that's rarely it but hopefully we've at least had one rain by then - 60 days to go.......
Posted by Cindie at 7:21 AM 8 comments: