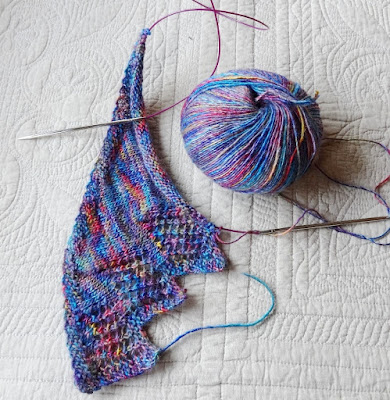 I haven't written all week because I just don't have anything to say or share.........in one of those moods where I wonder if I'll keep with my blog or not, but no decisions need to be made one way or the other, I'll just post when/if I feel like it.

A few nights ago I started knitting the Bella Shawl by Annie Lee-Baker. I was using one of those hand-dyed knit blocks with a color gradation. I love the colors but did not like the way the knitting was looking. The knit block is unraveled to knit it into a new project, well it leaves crinkles in the yarn, which in turn makes for messy looking knitting.  I pulled it out yesterday evening and wound it all into a skein, it's been washed and is now out on the blocker drying. In the meantime I still wanted to knit one of these shawls - it's a fun to knit pattern. So in my stash I found some Berroco Boboli Lace and started knitting last night and since I have 2 balls of it I may make the shawl a bit bigger.......I actually call patterns like this shawlettes since they're not full blown shawls. It's hard to tell in this photo but the colors are incredible and will look striking when worn over black. After I finish knitting this one I'll start on the one using the knit block color gradation yarn.

I started working on our holiday cards - they are not woven this year, instead they are fabric and based on quilting - no pix until after the holidays. I've worked on some small gifts, have some more to get to but am not inspired at the moment.....the story of my life right now, no inspiration or motivation - I think summer got to me this year.

On the fire front - since a bit of rain over a week ago and cooler temps the growth of numerous fires has slowed. They are still fighting them and we still have smoke but we've had some relief. Rain is moving in this week which should help even more with the fire fight. It's been a heck of a summer - more than the usual fires, lots of smoke, and so much heat most of the summer that I never got outside to do any dyeing.......maybe it will happen before winter hits, maybe not............I won't fret over it..........

First off - an apology that these pix are sideways. I took them with my phone - they were correct when downloaded to the computer. I then saved them again as new pix and they were fine, but I uploaded them to my blog and they're turned. This only happens with pix taken on my phone. Does anyone know how to remedy this issue? It's beyond me, I can't figure it out. 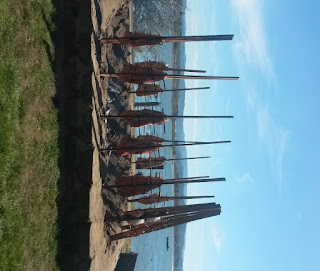 Anyhow, on the coast this past weekend we attended the Salmon Festival put on by the local Indian tribe. The salmon was baked indirectly on wooden sticks beside a wood fire. It was incredible tasting. It was basted with a huckleberry jam - oh my gosh - to die for. 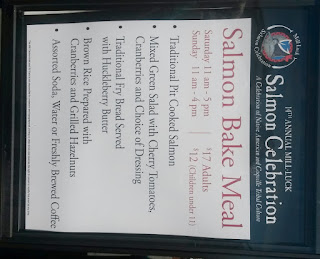 Here is the menu for the meal although I noticed it did not mention the basting with huckleberry jam or that they served another little container of huckleberry jam with it. We are definitely going the next time they hold this event.  I took no other pix but there was story telling, historical talks, prayers by a wise elder and dancing. There were dug out canoe races although they weren't going on while we were there. Many booths showing flint making, canoe making, etc. Then booths where one could try their hand at traditional Indian crafts. We didn't stick around for the release of the salmon to the river - I'm assuming they are the farmed salmon from the hatchery.

Nothing much creative happening here - just not inspired these days about anything much. In spite of lightning that came with thunderstorms the second half of last week starting new small fires the weather was an immense help to the fire fighting efforts. Fire growth slowed giving fire fighters more time to access and build more containment lines. It also gave some temporary relief from the smoke. Unfortunately temperatures have gone up again and fires are more active. I'm just hoping the region can hold on, without too much more fire damage, until the fall/winter rains come. There are numerous fires in our region but the closest one to us is the Chetco Bar Fire which is now up to 184,292 acres with an 8% containment perimeter line - it started on July 12th.

Does anyone else watch Outlander? I've got the first new episode of this season dvr'd and will watch it later today or tomorrow. Although I've already read the book that this season is based on I don't want any spoilers of what happens in the first episode. 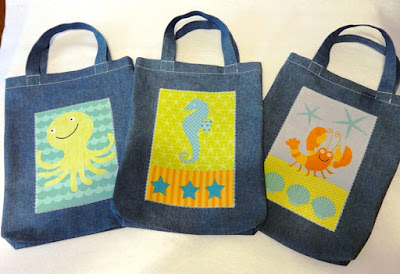 Today I spent a bit of time at the sewing machine appliqueing panels onto denim and sewing up some small totes. These are a community sew project for our neighborhood chapter of the American Sewing Guild. We'll be donating these cute little bags to our local Head Start program. The bags will be filled with assorted items for the kiddos.  I think I'll make a few more as my contribution.......then I'll move on to a new project. I came up with a 'process' to streamline making these and can get them sewn fairly quickly now.

Air quality index is at 377 at the moment, hazardous.  Some spots in our region are getting thunderstorms, mostly thunder & dry lightning (yikes more fire starts!) but a few areas are getting some rain too..........we're getting nothing so far. I haven't been able to see the infrared pix of the fires close to us for the past few days, too much smoke for the planes to fly over.  I hate fire season.......

This says it all - just too much smoke here.......it's overwhelming, even inside with the A/C running we smell the smoke.........it's gross. I think I heard earlier on the news that it was something like day 17 of smoke. No end in sight..........it will most probably be with us until the fall rains start which will probably not be until sometime in October. Thunderstorms are on the way, unfortunately they will contain no to very little spotty rain which means more dry lightning to start new fires.  I've been trying to stay inside but even for the short periods of time I'm out I think I'm going to have to resort to wearing a mask.

I am so done with fire season and the extreme summer heat.........but unfortunately it's not done with us. I'm beginning to wonder what it is I love so much about the Pacific Northwest....... 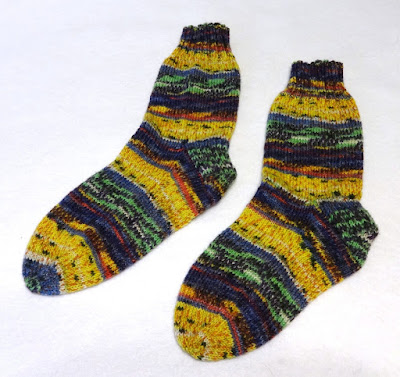 I can't tell you how long these sox have been on the needles - maybe two years, I really can't remember. I was in-between projects so thought I'd finish them up. Now they're ready to wear if we ever get cool weather.

I can't go into all the fire updates because it's just too much to write and it's too depressing and downright scary. The fires surrounding our area and are growing by leaps and bounds. The fire closest to us is the top priority fire in the nation but only has a fraction of personnel fighting it compared to other fires a 10th of it's size - the west is overwhelmed with fires and there is just no more support coming. There are so many fires and so many fires with evacuations. Here we have been told they will do their best with what they've got - not a warm & fuzzy feeling. The smoke is in the hazardous stage at our house, so thick that there is very little visibility, no air support working the close fires as they can't fly due to the smoke. I'm not sure how many hours one would have to drive to escape the smoke at this point. It smells of smoke inside the house even with it being closed up and the a/c running - there's no escaping it. We did get over to the coast for a bit but the smoke eventually made it over there too. Doing the rain dance here hoping for the fall rains to come earlier rather than later this year.