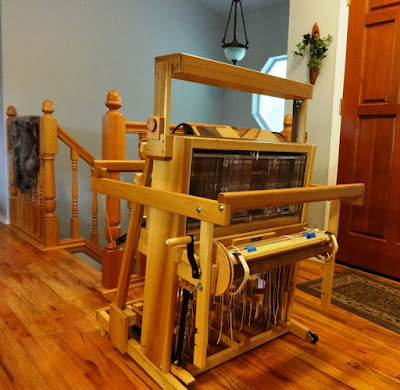 I have a house guest for a few weeks - Theresa's Gilmore Gem II.  It's a cute sturdy little loom. I'm trying it out to see if I want to buy one for the beach cottage where space is a big issue. Unfortunately I don't have time to get a warp on it for the next week but the following week I'll get to it. I like it's look and design but the decision on whether to buy one or not comes after I've sat down and woven a warp on it.........does it fit me, feel good to sit and weave at, do I like the tie-ups. I can't wait to get a warp on it............ 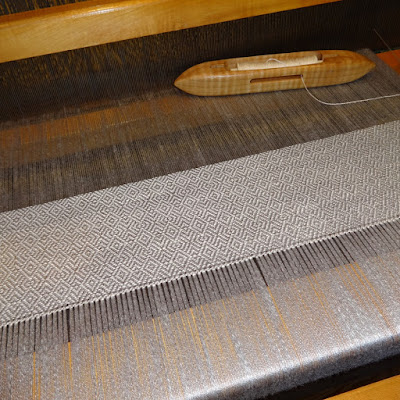 New yummy feeling scarves in my etsy shop. They have a space dyed rayon flake warp and tencel wefts. 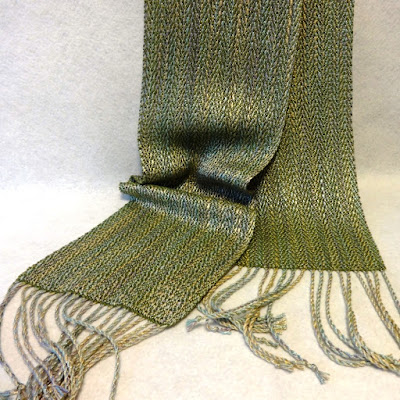 Down to Earth Scarf - Olive - Buy it HERE 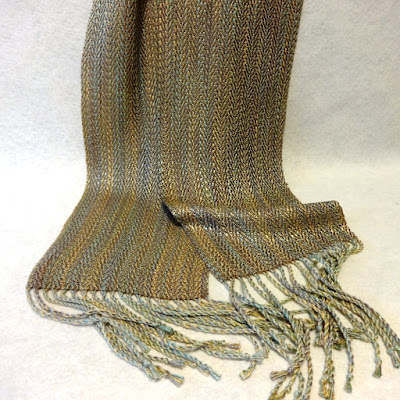 Down to Earth Scarf - Taupe - Buy it HERE

More new scarves to come, gingko scarves, but they are still drying, all need the fringes twisted and then the dreaded photography work......... the part of my job that I really struggle with.

Posted by Cindie at 2:33 PM No comments:

Ok, I'm hooked - I've been binge watching the first season of Outlander. It's right down my alley, historically themed books/series/movies. I only have 3 episodes left - ack!  The new season will be out soon but I don't have Starz so I'll have to wait until it's out on DVD.  I've been ignoring the books so far but think I'll have to make a long term commitment to read all 8 of them as soon after I read the next books up in my Library2Go queue (digital library books).


So, while I've been binge watching Outlander I've been spending time in the studio. I twisted the fringe on 3 scarves, they're now waiting to be photographed. I also got both the Macomber and AVL warped up..........and then there was some down time when I was so mesmerized by Outlander that I just had to stop and watch it.......... 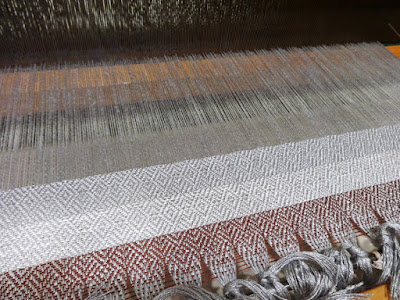 I put on a rayon flake shawl warp on the Macomber. Here's the beginning of the warp where I'm testing out using white rayon flake as weft and the same silver rayon flake for weft that I used for warp. I'll weave a shawl of each as I like them both very much. This is an 8 harness twill design. 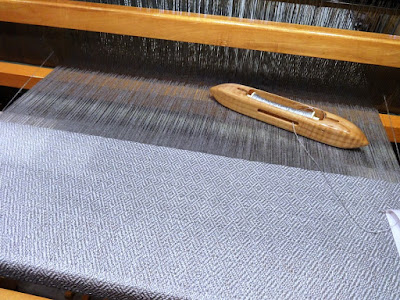 Here's the all silver grey shawl being woven. 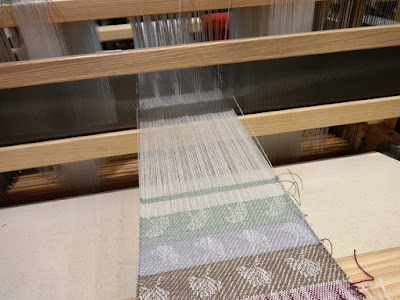 On the AVL a warp went on for 4 gingko scarves as I'm sold out of them. These will be lighter colors to go with the season. I was trying out weft colors here and will go with the taupe, silver grey and mint green for 3 of the scarves. I'm thinking I'll switch and weave the final scarf in taupe using my vines and leaves draft. 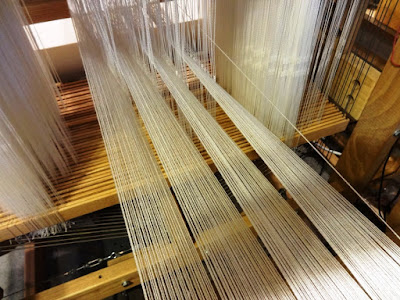 Here's what the back of the loom looks like with 40 harnesses threaded. It is a stretch to reach those back 8 harnesses when threading the heddles. Thank goodness there's an option to use the weaving program to raise the harnesses tromp as writ for easy threading. I can't imagine what a nightmare it would be trying to pick the next heddle up in the pattern without that. Theoretically I will have no threading errors this way but that's only if the computer program has no hiccups. 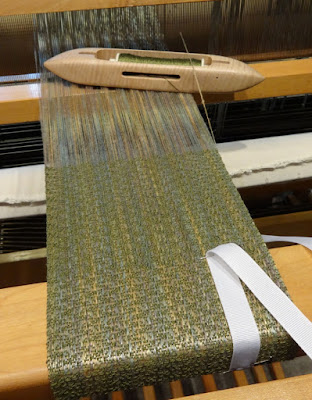 I got to spend quite a bit of time in the studio today. I got back to this scarf warp that's been on the loom for too long. I wove 2 scarves using the same taupe weft as the first scarf and then this scarf using a sage green weft. One of the taupe scarves will go to a benefit auction for our local Humane Society.

I also got a warp wound for the AVL to weave more of my gingko scarves - it's wound on the back beam awaiting threading through the heddles and the reed.

I started listening to the audio book Sarah's Key which is very good. I meant to download the digital book from Library2Go but accidently got the audio book instead.

In spite of the lovely weather and temporary break in the rain for a few days I'll spend tomorrow in the studio again rather than outside because of the need inside me to weave......

Posted by Cindie at 5:07 PM No comments: 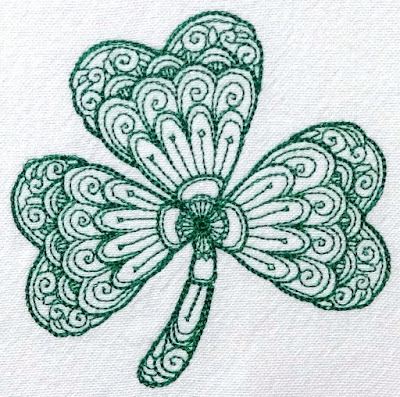 May the leprechauns be near you,
To spread luck along your way.
And may all the Irish angels,
Smile upon you St. Patrick's Day.

Posted by Cindie at 9:20 AM No comments: 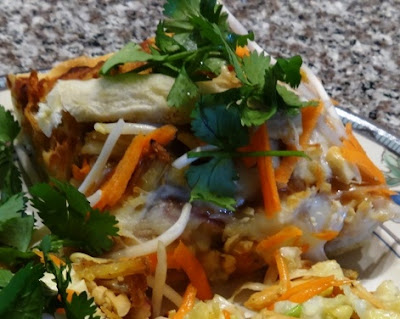 Yesterday I made Thai Pizza for lunch when a friend came over to knit/spin and watch 3 episodes of The Borgia's on Netflix - we've just finished watching the first season - this is a long term commitment of watching a series.........very fun. (I love period movies/series)  This photo is not very good or necessarily appetizing looking but the pizza/flatbread is outstanding.  Yesterday I tried out the fresh pizza dough from Winco grocery store - it was good but grew - it was like a super duper thick crust pizza which was too bready for me. Usually I buy the Trader Joe's fresh pizza dough but TJ's is 45 minutes away so not always convenient.  This is what's on this yummy pizza.

Start with your chosen pizza dough/crust
Spread a layer of your favorite jarred Thai peanut sauce on top
Next up a light layer of provolone cheese.....
very thinly sliced red onion......
roasted shredded chicken (I make this pizza the day after having chicken for dinner so I use leftover)
Now sprinkle some mozzarella cheese on top - I love tons of cheese on pizza but for this one I go light on the cheese........just enough to hold it together.
Now bake it - I baked mine for around 15 minutes in a 400 degree oven.

Now dig in. I served it with a salad in a bag - the Asian salad.  Sam was thrilled to come over to leftovers of this pizza and ate a ton of it for dinner last night. 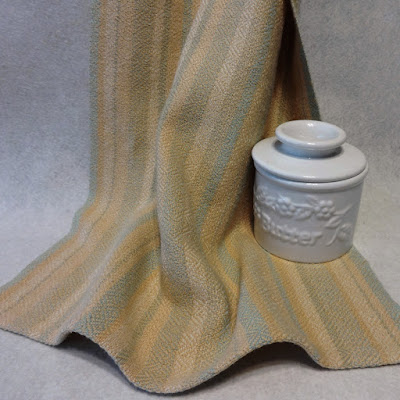 Newly woven towels up for sale in my etsy shop. I love the spring/coastal/beach/seaglass look of these. 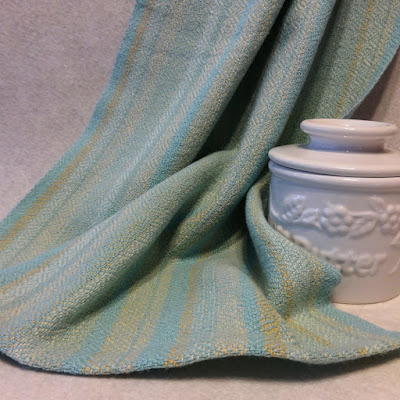 It was tough not to keep all of them as my towel drawer is full but I did manage to squeeze one more towel in for my own use.

For anyone that hasn't ever used a handwoven towel they're really missing out.  They last what seems like forever. I wash and dry mine weekly and they just keep looking nice for years. I could never go back to store bought hand towels for kitchen or bath.........well, except for the cute embroidered towels I create and sell in my etsy shop.........

We're just back from 6 stormy days on the coast. It was great but 're-entry' always sucks. We're both thrown into trying to play catch-up with work, phone calls, the emails we've ignored while being gone. I've done all I can do today, will pick it back up tomorrow morning when I pull and box up orders to get in the mail.


Sam was pulling up vinyl and underlayment in preparation for new flooring we'll be installing. It's slow going but coming along.  Since I determined working with a crow bar was a one person job I went to the spinning group at The Wool Co and spent time weaving. We did get in walks in-between squalls, we had hurricane force winds but were able to manage not to get wet until this morning........as far away from the house or other shelter as we could be the skies opened up - we got drenched..........although Bailey didn't mind. 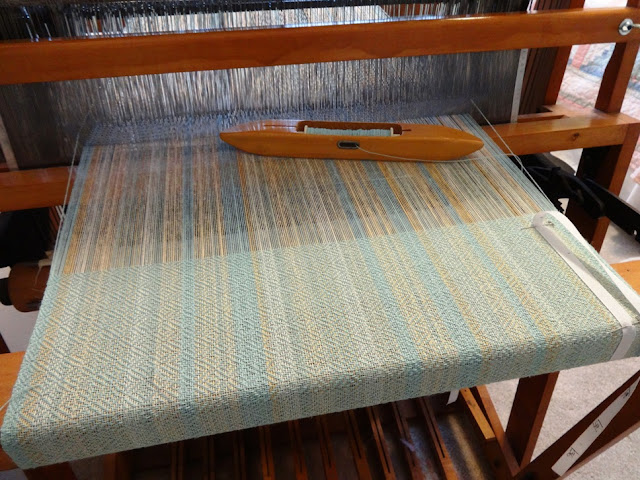 Here's the cottolin towel warp I was working on - very beachy colors - this one I used the seaglass aqua for the weft. I'm still working on this stash of cottolin although it's getting smaller. Maybe 2 more warps and all that will be left will be small bits on the spools. 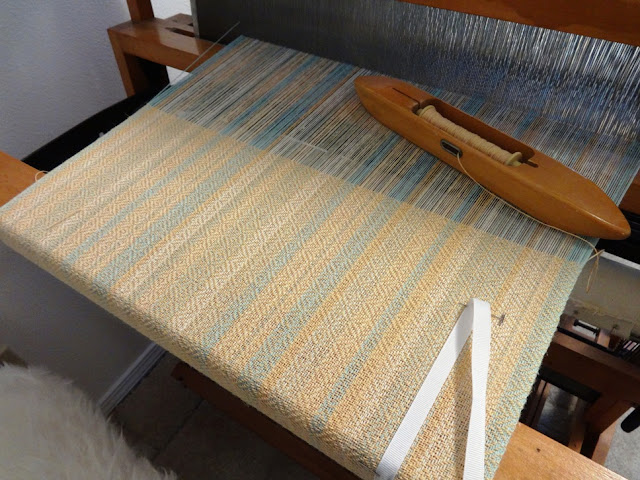 Here I used the sand color for weft. Forgot to say - this is a 4 harness point twill. 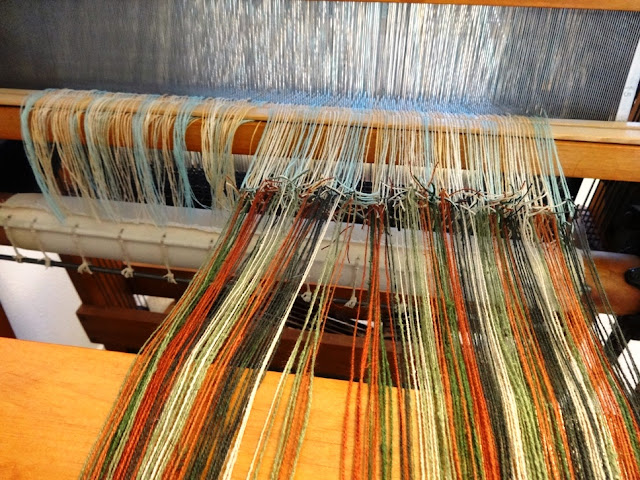 Sure wish I had mentioned to someone before I decided to tie this new warp on to the previous warp. A friend would have reminded me that I don't tie on to warps because I can thread the heddles and reed much quicker. It's been years since I've done it, hopefully I won't forget how much I dislike it so it won't happen again. And then there was one warp end that the knot came undone as I was winding on the back beam.........now there's a warp end with a weight hanging off the back of the loom.  I won't get into warping methods because weavers are very divided on this subject.......other than to say I'm a back to front warper and tying onto the previous warp is too much like front to back with tangles as the warp ends have to travel both through the reed and heddles - argh. 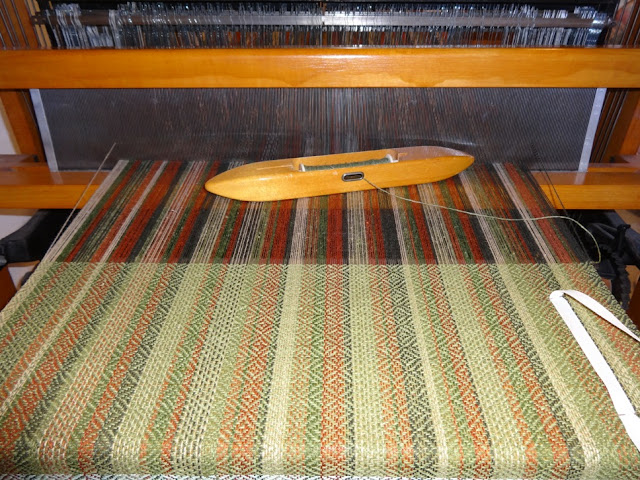 But I got it on and started weaving on a new towel warp. I like these colors although they're not very spring/summery. They'll actually go well in my kitchen in the woods here so I'll keep a couple. 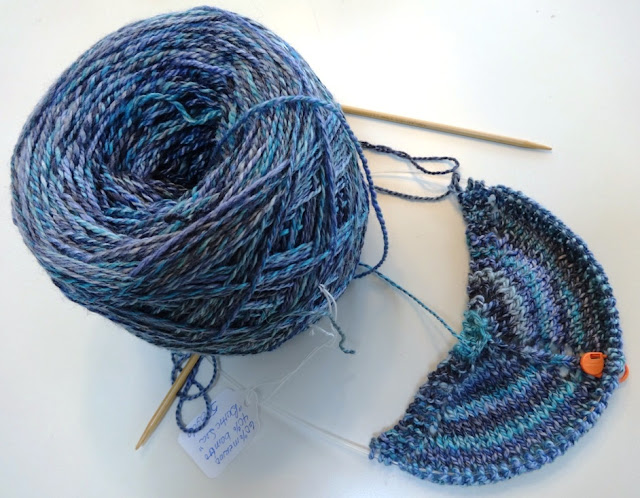 I started knitting another shawlette, this one using my handspun. I got a little further on it on the drive home.  This yarn was spun from some of my hand-dyed merino/bamboo - it was my Baltic colorway. 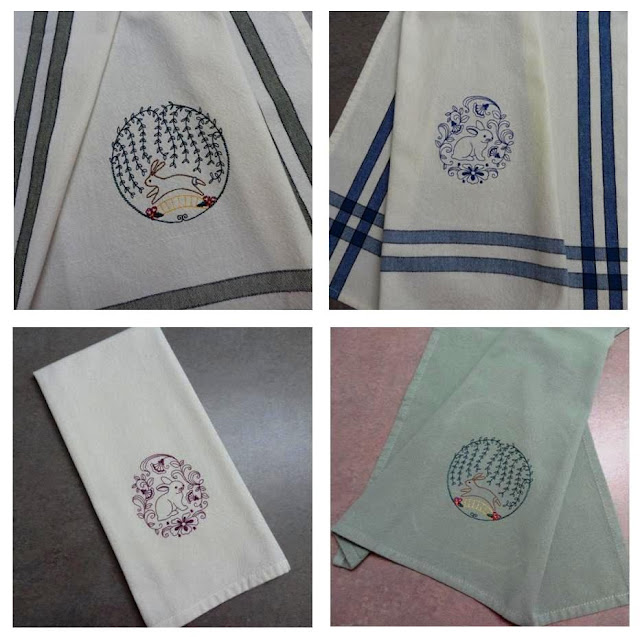 New bunny towels in my etsy shop just in time for Easter and Spring.........or really anytime of the year as they're not pigeon-holed to Easter with having eggs or Easter greetings on them. Perfect for those who love bunnies or have bunnies.  I'm thinking I need a set but which design - I love the cute little bunny with the flowers but then also love the leaping bunny with the vines........decisions, decisions.

As I posted recently I rarely get time to put out any holiday décor anymore so I'm going to stock up on holiday towels for my own house, woven and embroidered, as they're easy to pull out of the linen closet and put out for the holidays/seasons. I always use woven towels in the kitchen and bathrooms but usually they match the décor, not the holidays so that will vary in the future.  So, which will it be.......maybe the bunny with the vines..........or maybe the cute little bunny with the flowers.......or maybe both..........guess I better get back to the embroidery machine........ 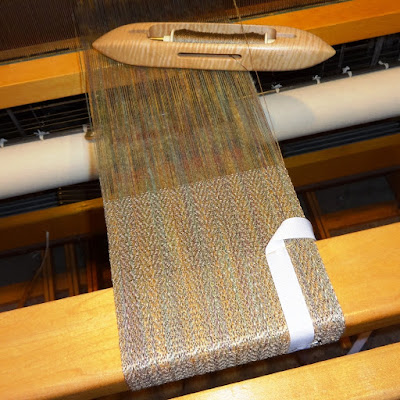 I'm at a loss as to what weft to use on the next two scarves. I've 'auditioned' numerous weft colors and so far this is the only one I've liked. I don't want to use the same weft for all three scarves. Will have to ponder on this some more before I get to scarf #2. I've got plenty of time for pondering as there are too many other things on the schedule for the next week, I'll be lucky to get time at the loom to get this scarf woven on anytime soon. What has happened to those days I spent in the studio from morning until dinner........I miss them.........

Posted by Cindie at 6:49 PM No comments: