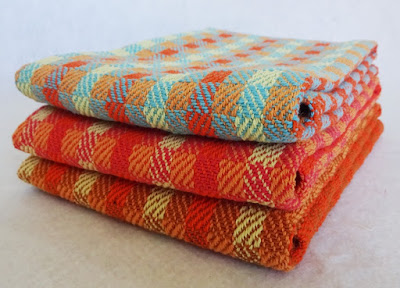 I finally got around to taking photos of the latest towels off the loom. These are woven in a 2 block twill. I loved the top one so much I kept one for myself, thought it would look good in the beach cottage kitchen.  And I gave one of the middle ones away the other day. These are now listed in my etsy shop for sale.

I'm plodding along on the rainbow towels getting weaving in here and there between other activities. A few of those will become a wedding gift.

Posted by Cindie at 5:33 PM No comments: 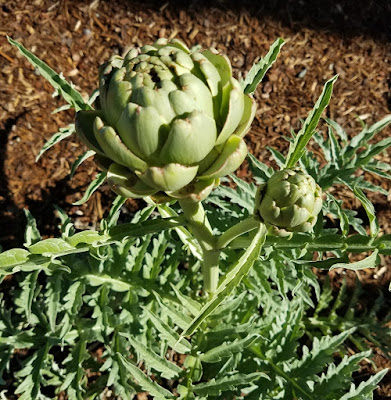 So excited - first artichokes ever. Planted an artichoke plant along with the new landscaping out front just 3 months ago (I think although time means nothing these days) and I'm rewarded with 2 artichokes already. I'm going to let them flower.

I haven't been posting much these days, just not much to say...…….well, actually I could say a lot about the state of affairs in this country which mostly saddens me but I won't go there.

I am still being creative, not trying to win any races at finishing projects, just trying to enjoy the process.  I'm still working on that hexxie project, many hexxies are sewn together now, many more around the perimeter to be sewn on. Who would have thought I'd love all that hand sewing so much. I've been doing a lot of sewing/quilt piecing on runners and placemats. I finished another quilt top for a throw that now needs to be long arm quilted, can't post a picture of that yet as it's a gift. 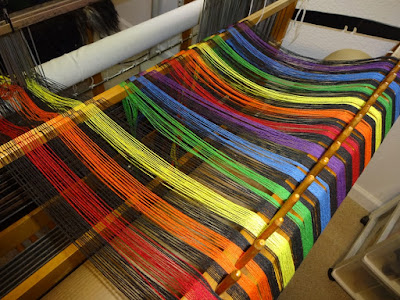 Here's the latest towel warp - needed something bright and cheery on the loom.  This is a view from the back of the loom as I'm threading the heddles. 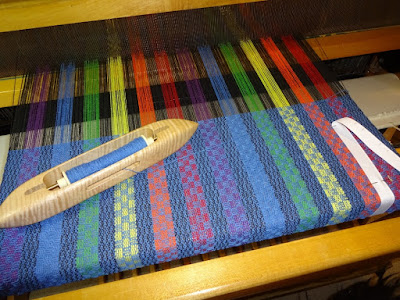 Here's the first towel using the blue as weft, it sure tones it down. May use purple and red for other weft choices, maybe black which I can't decide if it would be striking or just too dark - will sample to see. 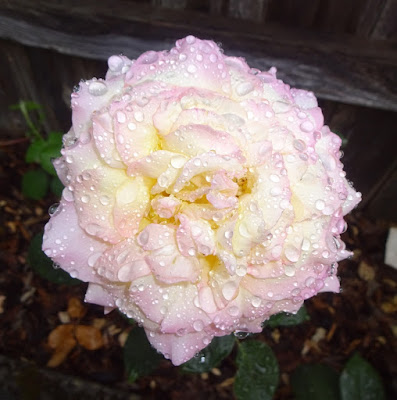 Roses in the garden after a big thunderstorm. This is a new rose bush I just planted in February in an empty spot along the fence where a neighborhood cat was using it as a litterbox......worked good putting a thorny bush there to keep it away. Of course it's still using the entire mulched front yard as a litter box....…….. 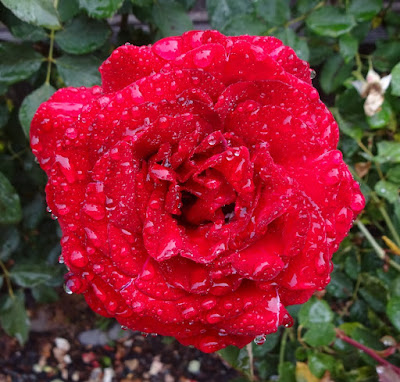 Here's one of the red roses.  The storm dumped such rain that most of the roses were hanging to the ground pummeled. A few days ago I deadheaded them so not much of a show right now but there are new buds popping up so it will be lovely again soon. 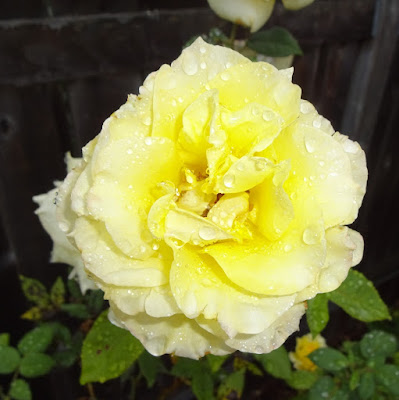 And yellow - my favorite color of rose.