Yesterday was our local ASG (American Sewing Guild) chapter's Make-It-Take-It day. For a very nominal fee of $15 I could take 3 classes and it included lunch, not to mention getting to visit with other sewers/quilters in our region that I wouldn't normally see. 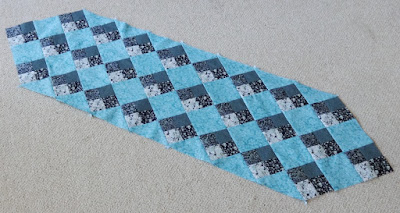 I pieced this runner. It's really long and will just fit on the buffet. I've already cut out more pieces to make a smaller runner for the table. It will still need to be layered with batting and a backing fabric and then I'll need to quilt it......most probably stitch in the ditch. 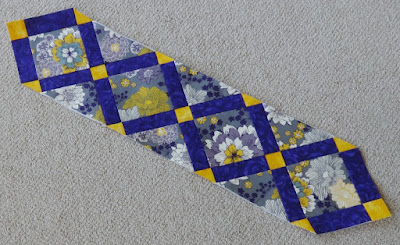 Here is the pieced runner top from another class. It's pretty small, not sure where I'll use it, maybe I'll make another one larger and use this one for a gift. This was called the easy peasy runner because it's ironed onto a grid stabilizer and then folded to do the stitching - very quick piecing technique. This one also needs batting, backing and quilting. The instructor for this project was the president of our local ASG chapter - big thanks to her for all her organizing skills and work in our region. 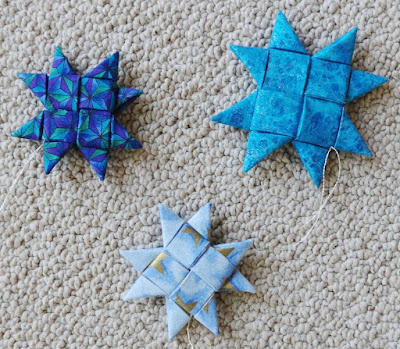 My third class was making these Swedish stars out of fabric strips.  A bit fiddly on the first one but then once over the learning curve it was easy. The instructor made over 80 of these for gifts - yikes - that's a lot of stars.

I haven't gotten back to that gingko quilted wallhanging I want to make - there just hasn't been time and I don't see much free time this week to work on that or finishing up the table runners. I did buy a few more pieces of mostly black fabrics that may replace a few of the others that I wasn't happy with in the mock up.

We've emptied out all the kitchen cabinets and are ready for kitchen cabinet demolition tomorrow morning. They have to be removed to get final measurements for the peninsula. 'Hopefully' the following week new cabinets will be in and the granite guy will be out to make the template for our countertops.  It's going to be a disaster in here for several weeks and probably some eating out.

I feel like I've been at a standstill trying to design a quilted wall hanging for over the couch. We have a big blank space that needs something. In our last house the couches were not up against walls and the major walls were all glass windows in the living area so nothing huge needed.


Today I decided I must start designing. I had looked at many gingko quilts online as inspiration.......I would have been really thrilled to have found a perfect pattern I could buy but nothing out there. 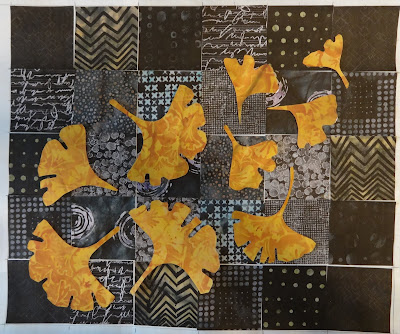 So, I bought the fabrics - all the blacks, grays with bits of light teal and gold. I just bought on speculation not knowing what I was going to actually end up using. I made color copies of the fabrics to work from and started cutting them up into 2 1/2" squares. I then arranged them on quadrille paper I had already marked out to represent 50" x 60". I tacked the photocopies down with a bit of glue stick.

My original thought was to use black for the gingkos which would then be embellished later with gold thread......but they were totally lost. I went to my stash of gingko fabrics, way too big stash, and found this gold so I photo copied it and cut out gingko leaves. This is now starting to look somewhat ok to me. Of course it will look totally different in real life as the 2 1/2" squares will actually be 10" squares so more of each fabric pattern will be showing. I won't know if I'll like that until I actually cut and lay them out.

Picture this over a charcoal gray sectional. The accent pillows that come with the couch have gold in them plus I've bought fabric to make more pillows that are in grays with golds, rusts and light teal. Hopefully the couch will be here in the not too distant future. We ordered it back in January but a month into waiting we were told the fabric had been backordered by the furniture manufacturer. It supposedly will be in sometime next month, we'll have the sectional in May......I hope the furniture store is correct about this.  It took us forever to pick out the fabric so we're willing to wait for it.

Should I just go for it???  The quilting I've done in the past has always been from patterns/instructions so I'm fretting over this. What's the worst that could happen??? I lose some hours and material - it's not the end of the world.  But I'll think on this for a bit and move on to something else. I want to weave another warp of rag table runners but these for our house - grey print fabric already bought, cones of yarn sitting on top of it to think about what I'll use for warp.  So, on to designing that - designing weaving comes much more naturally to me. And back to listening to the next in the Outlander series audio books - A Breath of Snow and Ashes - this one is 48 discs, I'm ready to start disc #3. 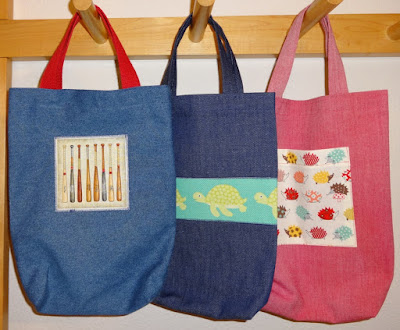 Finally finished the tote bags for the head start kids. Some have appliques, some have pockets. I'm so excited to be ahead of the game with my charity/community sewing this year. I'm looking forward to working on some of my own projects next. 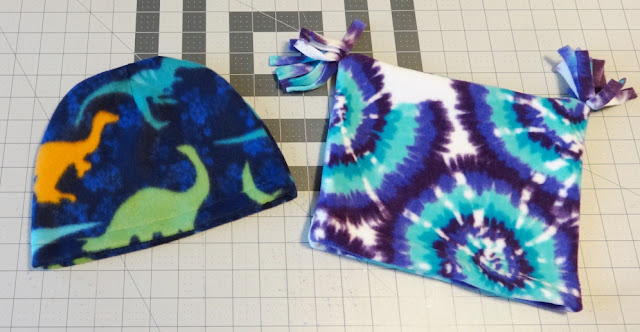 Fleece hats for the Head Start kids. In our neighborhood group of the American Sewing Guild we make little tote bags for the Head Start kids for the holidays. We fill the bags with a coloring book, crayons, pencils, sharpeners, tissues, toothpaste and brushes and candy/treats. This year we're adding fleece hats to the totes. I've decided to get my portion sewn early in the year rather than doing it later when I'm trying to do my own gift making. 14 hats sewn. Hoping to finish up tote bags soon. 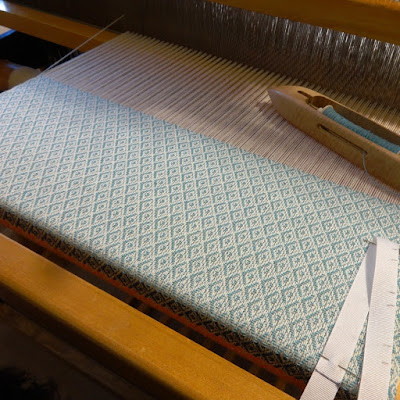 I finally got back to this towel warp, a dornick twill. But imagine my surprise as I took this photo and saw a little shadow on the wood of the front beam, see it to the left there. At first I figured there was something on the top of my loom creating a shadow....... 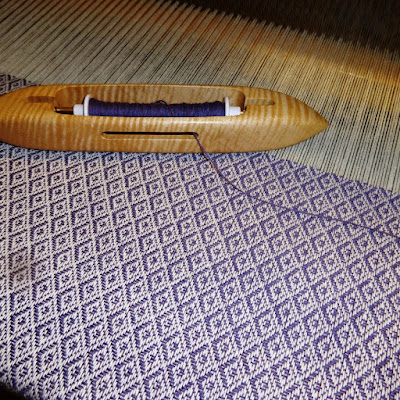 ....but no, here it is again in this photo - see it along the left side - it looks like a spot on the towel. Then I held the camera up to the wall and yep, it was still there. We looked at the lens with a loop and could see something but no matter how hard we tried to clean it, it was still there. I have no clue what happened between last week and this to the camera, it was just sitting in its case right where I left it. 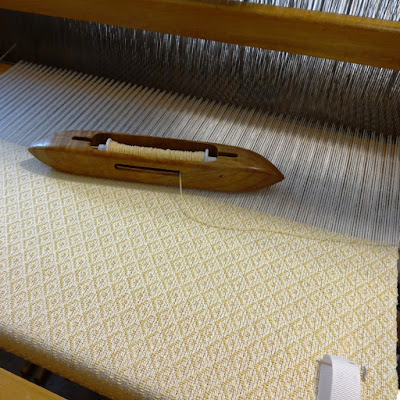 This photo had the spot cropped out of it.  I need to take photos of 5 colors of towels but have no clue if I can manage to take them all so I can edit out that spot. A new camera is on the horizon which doesn't make me happy as I love the one I have - it's small and takes nice pictures.

The AVL is still warped up for scarves, the loom at the beach cottage has a towel warp beamed awaiting threading of heddles & reed....next time over there. I want to start work on an art quilt for over our couch but I realized this month is when I take my machine in for cleaning/service so that will be put off for a few weeks - machine will go in this week. I do have an inexpensive Brother I use for classes that I can sew on if need be but I love my Bernina and how exact it sews so I'll wait until I have it back.

Although 27 when we got up this morning it will get up to 60 by afternoon. It's time to get a trailer load of garden soil for the raised beds we've put in. I can't wait to have a little garden again. It's just two small 3x8 raised beds but it's enough for right now. If I feel like I want another couple beds I'll add them next year. I pruned the 2 plum and 2 apple trees last month in addition to the grape vines. I can't believe how much we have in this city lot. We put in a fig tree last fall and I can see a few leaf buds so it looks like it's made it through its first winter. The gingko tree we put in last fall also has buds all over it. So much yard work to do out front but that will come in time, a previous owner got the idea that half the front yard being gravel was a good thing - not!!!