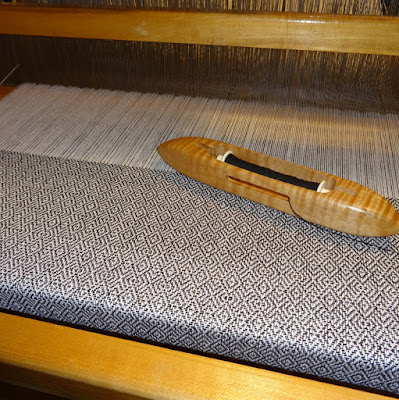 I can't believe I'm actually weaving again...in-between working outside in the yard trimming up bushes and trees. This twill pattern was requested by an etsy customer in black and white - she saw it in another color in my shop, only it had long been sold out. Will she actually buy them when I'm done, who knows, someone will if she doesn't. 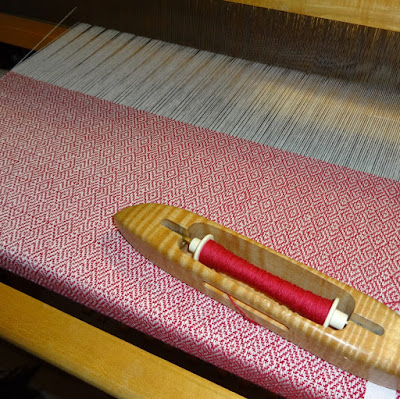 Here's the towel in red. I like to weave at least 2 of each color. Am thinking green is up next, must have holidays on the brain. Speaking of holidays now that we're in a neighborhood and there are kids there will be trick or treating - not Sam's favorite thing but I love to see the kids dressed up, not to mention an excuse to buy lots of candy. Numerous houses are already decorated for Halloween - can't go there but I do have a big pot of mums on the porch and will add some pumpkins when I get to the store. 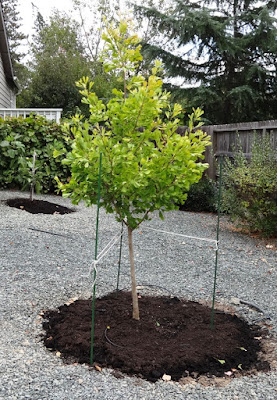 We bought a couple trees for the front yard recently and got them planted. Here's my ginkgo tree - I've always wanted one as ginkgo leaves are my favorite leaves.  See all that gravel?  Not sure why whoever built this house felt compeled to put such a large area of gravel along a portion of the front yard. It is going but not until next spring. We'll be putting more bushes in and somehow getting the gravel out and replacing it with mulch. 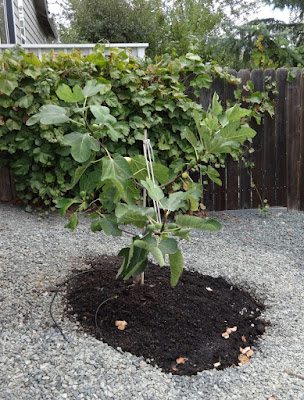 And here's my new fig tree, came complete with figs, two ready to eat........which I did. Behind the fig is the fence to the backyard - those are the white grapes gone wild coming over to the front side yard of the fence. 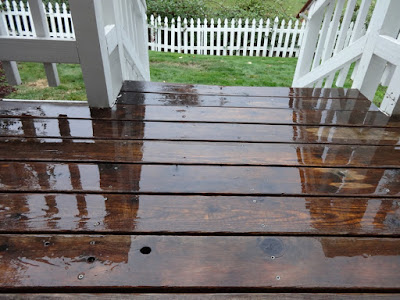 As if right on cue it rained yesterday evening and during the night - I love it. I always predict the first rain to be the last day of September or first day of October - I was close. This does not signal an end to fire season, we need a lot more rain and snow in the mountains to do that but it's a step in the right direction. We had a record 110 or 111 days without rain this year (not sure which) - a record, not a good record to be setting in a fire prone area. 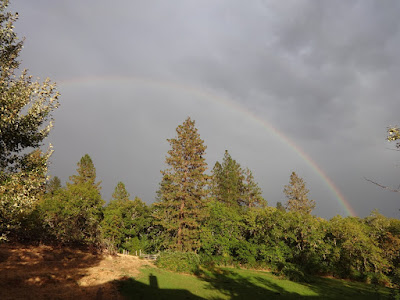 And here's the rainbow I saw out off the back porch (pictured above) - fitting to celebrate rainfall. 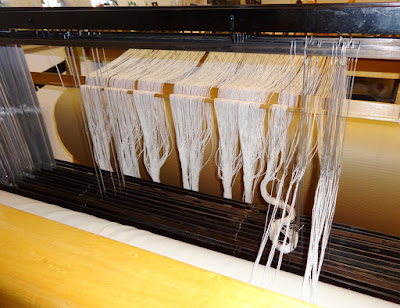 It's about time I get a warp on a loom. It's been months.........house hunting, getting a house ready to sell, packing, moving, unpacking, working on new house and still caring for the old house sure takes its toll on my creative time. This week is pretty busy but I am squeezing in time to get a towel warp wound and get started threading it. I'm excited. There is still much to do here but I'm choosing to ignore it........this morning I did work out in the yard for a couple hours so that's something.

Crisis the other night - Bailey got sprayed by a skunk out back - so much for living in the city as opposed to the country. We were out front in the dark by the light of the neighbor's Halloween decorations, bathing him with peroxide, baking soda and dish soap. It worked pretty good although still a little pepe la pue aroma on the top of his head. He was still feeling sorry for himself the next morning. 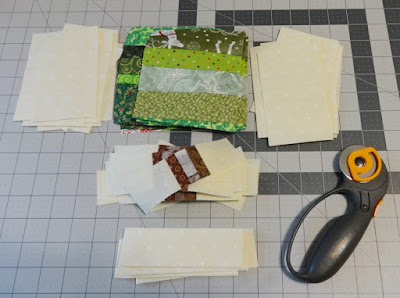 Been busy around here with this and that and now visiting family. I try to sneak in a few minutes here and there to work on our holiday cards - not telling what they are but here are the pieces I'm working on sewing together.  I haven't quite nailed down how the card will go together but getting the sewing done will be the most time consuming part of it.

I really haven't been inspired to blog much these days, I suppose because I have very little creative time in my days. I'm hoping that changes come next week, I'm going to try my best not to let other chores or duties interfere too much. I'm doing pretty good with saying 'NO' these days when asked to volunteer or help with something. 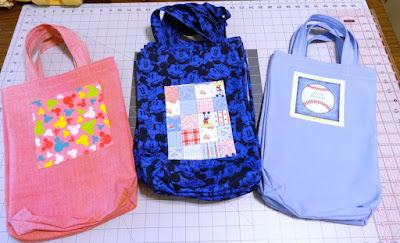 Yesterday afternoon I worked at warp speed to sew up my quota of 10 small tote bags for our American Sewing Guild Head Start project. Kids will get tote bags filled with goodies at the holidays. Glad to have my charity sewing finished up so I can move on to my own projects not to mention finishing up organizing since we moved. Hoping to get art up on the walls soon. 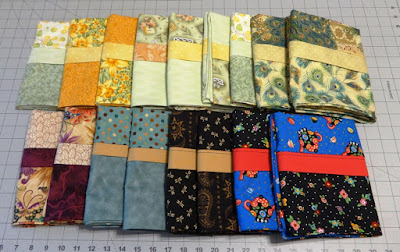 I just finished sewing up 17 pillowcases for charity. Our neighborhood group of the American Sewing Guild sews pillow cases for a local care facility. I hope they brighten up some of those residents days seeing them on their beds........and having the beautiful fabrics under their heads because what I got from the guild was high quality fabric. I thought I was picking out enough fabric to do my quota of 10 cases.....well, there was enough for 17 so I just kept sewing.

Next up are the small tote bags for Head Start kids that we fill with goodies at the holidays. I feel the need to get the charity sewing out of the way so I can work on my own sewing and get back to weaving.

Been missing in action again - I have been busy, just haven't had much to share.  Been busy unpacking the last of the boxes (other than holiday stuff). My two studio rooms are set up ready to work in - all that's left is to put some pictures on the walls in those rooms, and the rest of the house. 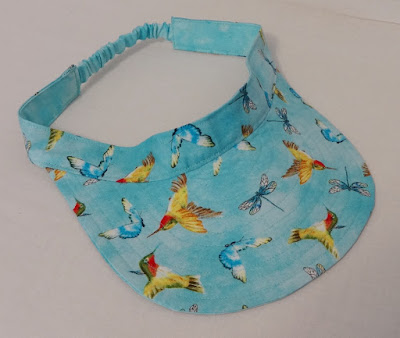 I went to the American Sewing Guild meeting on Tuesday and friend Kathy taught us how to make fun visors. I love it and will be making more. 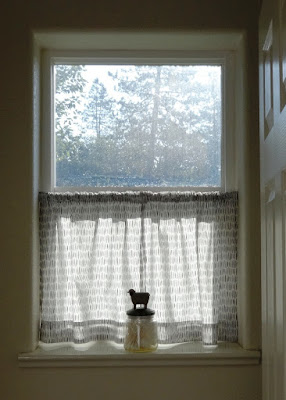 I did sew bathroom café curtains. I have family arriving next week and figured they'd probably appreciate a curtain in the guest bath. The bath is ending up black, white and gray with bits of other colors due to the black & white marble countertops. It's hard to see this fabric but it's little dashes of gray and black on a white background. Ignore the filthy windows - we haven't had time to wash them since moving in this house and I don't think the previous owners ever washed them in the 4 years they lived here. ﻿ 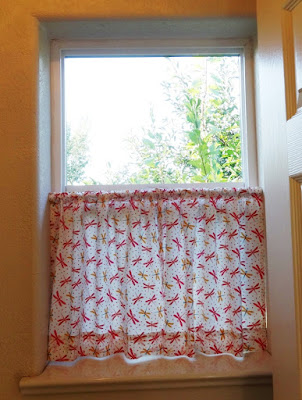 Here are the cafes in the master bath toilet area. I had bought a vintage table runner to make them but then found this cute dragonfly fabric in my stash - I love it, it makes me smile. We will need these once the plum trees outside lose their leaves. 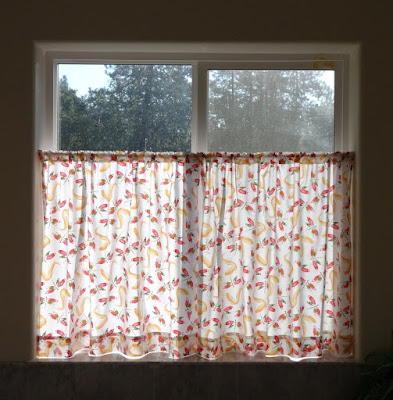 And here's the café over the tub area. it also has dragonflies and is a coordinating fabric to the other one. 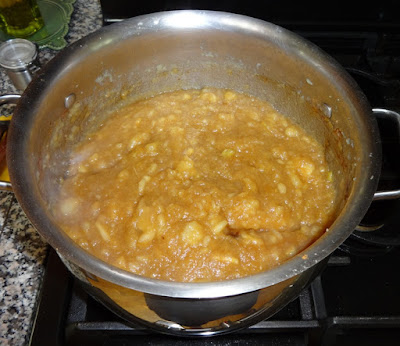 We have a couple apple trees at our new place so yesterday I made spiced applesauce for the freezer - it is yummy. I need to make more as we have a number of apples. I also made an apple pie. When the fridge Pillsbury Crust in the box says 'best by July 2018' believe it. It's edible, especially with vanilla ice cream, but really the crust is past it's prime - pretty heavy, not flakey at all. 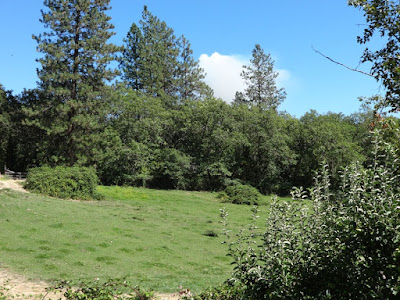 And this final picture is yet another fire but this is old news. This was from Friday afternoon looking out our back door. If I hadn't known exactly where it was I would have thought it was just blocks away - it was on the other side of town, which isn't far but not a danger for us. Since then a fire broke out not far from our old house (which we still own, another story) but not close enough to be a danger but it is a danger for many others including friends. I have heard of one house that burnt but there are apparently others, no official news on the numbers yet. Hoping they get that fire out within the next few days and hoping those I know and others still have their homes once the fire is contained. And then today when driving home we saw a plume of smoke close to the fire from Friday - sounds like it got snuffed out quickly.  I am so done with fire season this year - it gets worse every year. And the story on the old house which we still own - it was close to the huge fire which is now ok on our side of the fire but kept anyone from looking at it. Just this past week a few realtors were out with prospective buyers, unfortunately none of them were interested in our house.......but at least it's getting shown now that the fire is under control and we aren't socked in with smoke.....just need the perfect person for a really nice home to go look at it.